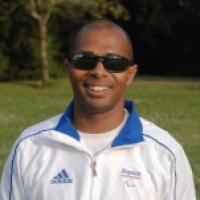 When and where did you begin this sport?
He took up the sport at age 15, and at age 21 he joined an athletics club.
Why this sport?
He played football as a striker before focusing on athletics, as he was a strong sprinter. He chose long jump because he was interested in the technique needed for the discipline.
Club / Team
Stade Nantais Athletisme: France
Name of coach
Fabrice Ploquin [personal], FRA