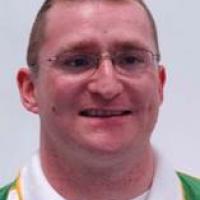 When and where did you begin this sport?
He began powerlifting in 2010.
Why this sport?
He retired from athletics in 2008, but after two years wanted to try a different sport.

Injuries
In 2015 he underwent shoulder surgery. The procedure was more complicated than anticipated, and due to the increased recovery time required he withdrew from the 2015 European Championships in Eger, Hungary, and announced he would not be fit enough to qualify for the 2016 Paralympic Games in Rio de Janeiro. (radiokerry.ie, 19 Sep 2015)
Other sports
He competed in para-athletics at the Paralympic Games in 1996 and 2008. He has also participated in autosolo motor racing in Ireland. (independent.ie, 29 Aug 2012; rally.ie, 08 Dec 2011)
Impairment
He has spina bifida. (iwa.ie, 2008)
Other information
OTHER ACTIVITIES
He has served as the International Paralympic Committee [IPC] athlete representative for powerlifting, and the chairman of the Kerry Spina Bifida and Hydrocephalus Association in Ireland. He has also coached Irish para-athlete John McCarthy. (traleetoday.ie, 05 Oct 2015; radiokerry.ie, 19 Sep 2015)