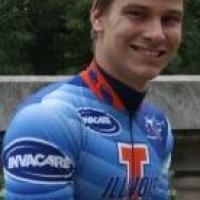 When and where did you begin this sport?
He took up wheelchair sports at age six with the Rochester Rookies track team in the United States.
Why this sport?
He attended his first junior nationals in 1998 in Bellevue, WA, United States, and was impressed by the older athletes. They showed him what was possible and motivated him to train harder and stay committed.
Club / Team
University of Illinois: Champaign, IL, USA
Name of coach
Adam Bleakney
Coach from which country?
United States
Training Regime
He trains for up to seven days a week in the period before major competitions.

Hobbies
Spending time with friends, reading, scuba diving, watching TV, basketball, roadracing, handcycling. (teamusa.org, 28 Jan 2011)
Injuries
During a race at the 2011 World Championships in Christchurch, New Zealand, he had to break suddenly to avoid being hit by a car. He dislocated his shoulder and finished the race injured. (sportsnetny.org, 15 Jan 2011)
Sporting philosophy / motto
"Just because we use a chair to get around in doesn't mean we have to just sit there. We can challenge our own abilities while having a lot of fun." (rochesterrehab.org, 04 Nov 2010)
Other sports
He is a certified divemaster. (pushacrossamerica.org, 2013)
Ambitions
He wants to help children who use wheelchairs experience as much as possible in life. (rochesterrehab.org, 04 Nov 2010)
Impairment
He was born with spina bifida. (mpnnow.com, 07 Jul 2011)
Other information
PUSH ACROSS AMERICA
He has become the first person in history to cross the United States in a wheelchair. Beginning on 06 April 2013 he set off from Los Angeles, CA, United States, and arrived in New York, NY, United States, on 15 Jun 2013 after pushing his racing wheelchair from one coast to the other. The journey was set up by a non-profit organisation called Stay Focused. (rochesterrehab.org, 06 Apr 2013; uk.eurosport.yahoo.com, 16 Jun 2013)

CAYMAN ISLANDS MARATHON PIONEER
He participated in the Cayman Islands Marathon for two consecutive years to assess the race's feasibility for including a wheelchair division. The trial was deemed a success and in 2010 the marathon became open for registration by any wheelchair athlete. (caymanislandsmarathon.com, 15 Sep 2010)