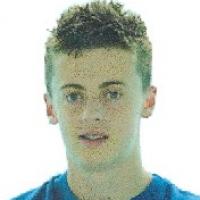 When and where did you begin this sport?
He began swimming at age five.
Why this sport?
He started swimming on a regular basis after he had an operation on his right foot and was advised that swimming was the best form of exercise for his rehabilitation.
Club / Team
Team Ipswich: England
Training Regime
He trains at Crown Pools in Ipswich, England.

Hero / Idol
British swimmer James Hickman. (paralympics.org.uk, 01 Jan 2016)
Injuries
He took a break from swimming at the end of 2014 due to illness. He returned to competition in April 2015. (cpsport.org, 12 Apr 2016; eadt.co.uk, 22 Jun 2016)
Sporting philosophy / motto
"If you're in the way of my hopes and dreams I suggest you move." (Facebook profile, 14 Mar 2019)
Awards and honours
In April 2016 he was presented with the Andrew Stubbs Trophy at the Cerebral Palsy Sport National Swimming Championships in England. (cpsport.org, 12 Apr 2016)

He carried the torch as a part of the relay for the 2012 Paralympic Games in London. (lloydstsblondon2012.co.uk, 19 Sep 2011)
Famous relatives
His uncle played football for Ipswich Town in England. (sportcentric.com, 17 Mar 2010)
Ambitions
To compete at the 2020 Olympic Games in Tokyo. (Facebook profile, 14 Mar 2019)
Impairment
He has cerebral palsy, which affects the right side of his body. (bbc.co.uk, 21 Nov 2006)
Other information
OTHER ACTIVITIES
He works as a swimming instructor for Team Ipswich in England. He was part of the coaching team that helped prepare the Great Britain Para swimming team for the 2014 Invictus Games in London, England. (suffolkswimming.org.uk, 14 Mar 2019; swim-with-me.co.uk, 06 Aug 2014; LinkedIn profile, 01 Jan 2016)