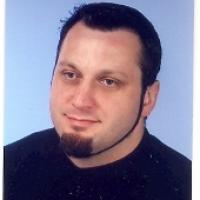 When and where did you begin this sport?
He began powerlifting in 1999 at age 24 in Cetniewo, Poland.
Why this sport?
His friend suggested he go to the gym after his accident. He also competed in para-athletics, but he liked powerlifting more. "Sport has been always my passion and saved me from passivity."
Club / Team
START Gorzow Wielkopolski: Poland
Name of coach
Mariusz Oliwa [national], POL

He was honoured with the Silver Cross Of Merit by the president of Poland in 2008. (sejm.gov.pl, 15 Dec 2008)
Impairment
In 1995 he fell under a train and lost both his legs. (miedzychod.naszemiasto.pl, 27 Jul 2012; dzienniknowy.pl, 03 Nov 2004)
Other information
OCCUPATION
He is a county councillor in his hometown Miedzychod, Poland. (powiat-miedzychodzki.pl, 29 Nov 2015)