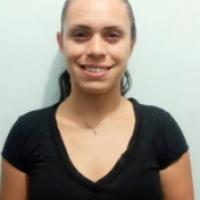 When and where did you begin this sport?
She met the Brazilian para-athlete Paulo de Almeida, who lost his right leg and then became a marathon runner. She began running and swimming after he gave her a sports prosthesis as a gift.
Club / Team
Associacao Desportiva Para Deficientes [ADD]: São Paulo, BRA

Nicknames
Sa (Facebook profile, 08 Dec 2016)
Hobbies
Walking and training dogs. (globoesporte.globo.com, 27 Dec 2014)
Awards and honours
She took part in the Olympic torch relay for the 2016 Games in Rio de Janeiro. She carried the torch in the city of Osasco, Brazil. (revistaincluir.com.br, 15 Jul 2016)
Other sports
She has also competed in para-triathlons in Brazil. (bodytech.com.br, 15 Oct 2015)
Famous relatives
Her husband, Marcio Braga Leite, is also a para-athlete. He finished fifth in the men's visually impaired F11 discus event at the 2016 Paralympic Games in Rio de Janeiro. "He is my arms, and I am his eyes." (Facebook profile, 08 Dec 2016; rio2016.com, 12 Sep 2016; globoesporte.globo.com, 27 Dec 2014)
Impairment
In 2010 she accidentally touched a high tension wire while trying to repair the television antenna on the roof of her home, and was electrocuted. Her injuries resulted in the amputation of both hands, her right leg below the knee, and several toes on her left foot. (bodytech.com.br,15 Oct 2015)
Other information
OTHER ACTIVITIES
She is also a professional dog trainer. (folha.uol.com.br, 10 May 2015)