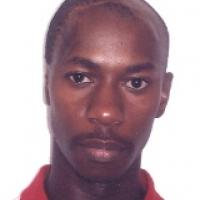 When and where did you begin this sport?
He began the sport during high school in 2003.
Why this sport?
"Athletics is an individual sport with individual success or failure."
Name of coach
Suzanne Ferreira [national]
Coach from which country?
South Africa

In 2013 he was chosen as Sportsman with a Disability of the Year in Ekurhuleni, South Africa. (sundayworld.co.za, 07 Jul 2013)

He was named Junior Sportsperson of the Year at the South African National Championships in 2006 and 2009. (Athlete, 06 Oct 2010)
Impairment
He was electrocuted at age nine when the kite he was flying hit a pylon. He spent nine months in hospital and recalls a time during treatment when he couldn't tell skin from bone. Both his arms were amputated below the elbow. "I lost my hands but I don’t just want to be a disabled person. I want to be an extraordinary, amazing human because being disabled is not enough. I want to be that guy without hands who can do things much better than most." (mg.co.za, 19 Jun 2013; citizen.co.za, 24 Aug 2012)
Other information
OCCUPATION
In 2014 he started working at Werksmans Attorneys, a law firm in Sandton, South Africa, where he has to complete two years of litigation and commercial law work before he is admitted as an attorney. (citypress.co.za, 06 Apr 2014)

AMBASSADOR
He has been an ambassador for iStart2, an initiative that uses art, sports and business for sustainability programmes in South Africa. (thisability.co.za, 2013)