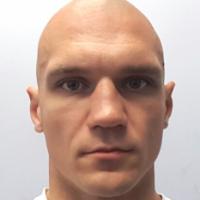 When and where did you begin this sport?
He took up the sport at Greenbank Sports Academy in Liverpool, England.
Why this sport?
He had trained in athletics when he was younger in Poland. "I have always been interested in sport. Initially I followed my father into this particular sport. My father was a coach of middle-distance runners. First I did high jump and later pole vault." After his accident he was encouraged into Para sports by doctors while undergoing rehabilitation in England.
Club / Team
START Wroclaw: Poland