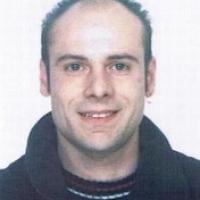 When and where did you begin this sport?
He began in 2007 in Padua, Italy.
Why this sport?
While he was preparing his prosthesis he met Paralympic athletics coach, Alessandro Curis, who invited him to try the sport. He did and found he liked it.
Club / Team
ASPEA Padova: Italy
Name of coach
Gianfranco Sommaggio [club], Mario Poletti [national]
Coach from which country?
Italy
Training Regime
He trains three hours a day.