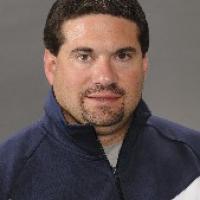 When and where did you begin this sport?
He began participating in wheelchair sports in 2003.
Why this sport?
He was encouraged to get into Para sports by several friends in Michigan, United States of America. "A guy from North Branch [MI] kind of sunk in his claws and got on me, saying, 'You gotta try this [sport], you gotta try that, and everything else'. At the same time I had a group from Bay City getting on me about playing wheelchair rugby. I found out I was good at some of the stuff."
Name of coach
Bill Godina [personal]
Training Regime
In 2020 he focused mainly on weight training at home during the COVID-19 pandemic, and also practised throwing in his back garden. He said he gained strength during that time, but his technique may have suffered. "I can still do all the strength stuff. I'm probably stronger than I was when I was younger. But I'm not fast. Speed comes into play. You can't just muscle the shot put out there. You've got to have technique and speed also."

Injuries
In October 2015 he fractured his knee a week before he was due to compete at the 2015 World Championships in Doha, Qatar. He was cleared to participate at the competition and won silver in the F53 shot put. (SportsDeskOnline, 06 Apr 2021; teamusa.org, 31 Oct 2015)
Awards and honours
In 2008 he was named Best Overall Field Athlete at the Michigan Wheelchair Games. (usparalympics.org, 05 Mar 2010)

In 2005 he was inducted into Michigan's Athletes with Disabilities Hall of Fame as Athlete of the Year. (usparalympics.org, 05 Mar 2010)

In 2005 he was named Most Valuable Player [MVP] at the Ohio Wheelchair Games and the Michigan Wheelchair Games. (usparalympics.org, 05 Mar 2010)
Other sports
He has played wheelchair rugby at national level in the United States of America. (usparalympics.org, 05 Mar 2010)
Ambitions
To compete at the 2020 Paralympic Games in Tokyo. (southeasternpva.org, 01 Jul 2020)
Impairment
He was struck by lightning while on duty with the United States Army Reserve [USAR] in Michigan, United States of America. The strike threw him more than ten metres and caused various internal and external injuries, including quadriplegia. (Facebook profile, 15 Dec 2020; southeasternpva.org, 01 Jul 2020; usparalympics.org, 05 Mar 2010)
Other information
DOWNGRADED TO SILVER
He was originally awarded the gold medal in the F53 shot put at the 2019 World Championships in Dubai, United Arab Emirates, but officials later identified a breach in the new IPC throwing rules that had been introduced that year and he was downgraded to the silver medal position. "What other countries have interpreted it as and what the officials interpreted it as is the back of knees sliding forward away from the seat cushion for a second as you throw, which constitutes what's called a lift and negates that throw. It's like a red flag on that throw. They were throwing red flags left and right over there. It was kind of ridiculous." (southeasternpva.org, 01 Jul 2020)

OTHER ACTIVITIES
He has served as sports director for the Michigan Paralysed Veterans of America. (michiganpva.org, 01 Jun 2019; teamusa.org, 01 Oct 2016)