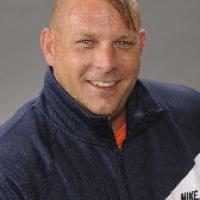 When and where did you begin this sport?
He was introduced to discus and shot put at the 2006 United States Olympic Committee [USOC] Paralympic Military Sports Camp.

Hobbies
Fishing. (Time Magazine, 9 May 2007)
Injuries
He had to have his right triceps surgically repaired when he hyperextended his elbow during a throw at the 2011 Parapan American Games in Guadalajara, Mexico. (chronicle.augusta.com, 22 Jun 2012)
Sporting philosophy / motto
"If you believe you can achieve." (huffingtonpost.com, 31 Aug 2012)
Other sports
He has played wheelchair basketball for the Walton Blazing Bulldogs in Augusta, GA, United States. (USOC Pressbox, 28 Jun 2007)
Ambitions
To win a Paralympic gold medal. (pva.org, 10 Sep 2012)
Impairment
He was injured while serving in Tikrit, Iraq in 2003. He fell off an ammunition truck and damaged his spine, which resulted in paraplegia. (US Paralympics, paralympic.org, 11 Mar 2010)
Other information
MILITARY SERVICE
He became a service technician for the US Army a few years after leaving high school. He took a two-year break from service in the late 1990s, but realised it was where he felt he belonged so he returned to service until his injury in 2003. (US Paralympics, 11 Mar 2010)

COMMUNITY WORK
He is a co-founder of Champions Made from Adversity [CMFA], a non-profit organisation that provides sports and leisure activities for people with a physical impairment and their families. (US Paralympics, 11 Mar 2010, cmfa.us, 31 Aug 2012)