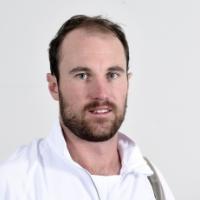 When and where did you begin this sport?
He began Para snowboarding in 2015 in Mount Buller, VIC, Australia.
Why this sport?
He hoped to surf again after recovering from the injuries he sustained in a shark attack in 2014, but he found popping up onto the board and riding the waves he wanted too difficult. He then tried snowboarding, initially in Australia, and then on a three-week trip to Canada where he met Para snowboard coach Mark Fawcett. Pollard discovered how much the sport was growing and decided to start competing. "[Fawcett] tried to get me to ride for the Canadian team, and told me all about the sport, but I told him I was from Australia and that couldn't happen. The thing I get out of snowboarding, which is really similar to surfing, is that presence in the moment. You're just there in the moment and everything else in your life just blurs out the faster you go."

Nicknames
Polly (theherald.com.au, 16 Feb 2015)
Hobbies
Kneeboard surfing. (Instagram profile, 27 Sep 2020)
Memorable sporting achievement
Finishing sixth in snowboard cross at the 2017 World Cup event in Lake Tahoe, CA, United States of America. (paralympic.org.au, 01 Jun 2017)
Hero / Idol
Australian Para snowboarder Ben Tudhope. (paralympic.org.au, 16 Jun 2017)
Sporting philosophy / motto
"The biggest thing I've learnt through all this is to approach each challenge with an open mind and a positive outlook because you never know for sure how things will turn out." (seanpollard.com.au, 10 Apr 2018)
Impairment
In 2014 he was attacked by two great white sharks while surfing off the coast of Esperance, WA, Australia. He lost most of his left arm and his lower right arm. (bunburymail.com.au, 16 Sep 2016)
Other information
MICHELANGELO PROSTHESIS
In late 2015 he received a new bionic limb for his right arm, known as the 'Michelangelo Hand'. The limb's shape and appearance is modelled on the bones, muscles and tendons of a human hand and fingers. It uses electrodes to pick up signals in his remaining muscles, which are then translated into movement of the hand. He says the hand allows him to flip steaks on the barbecue, mow the lawn and hold a drink. "It's taken a bit of practice but it's pretty cool being able to give someone the thumbs up." (perthnow.com.au, 12 Dec 2015; theherald.com.au, 16 Feb 2015)

WIFE
He credits his wife, Claire, who is a teacher, with helping to save his life the day he was attacked by two great white sharks in 2014. She was on the beach with him, and he says her actions and calm demeanour helped him survive. "She helped with critical first aid when I first got out of the water. When I was in the back of the car on the way to hospital she was just comforting me and making sure I stayed awake. We have been through a fair bit together, so it was good to make it official [by marrying]." (thewest.com.au, 15 Jan 2019)

FORMER OCCUPATION
He worked as an electrician prior to his injuries. (perthnow.com.au, 15 Feb 2015)