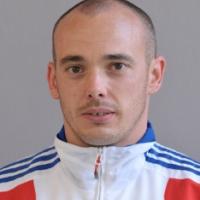 When and where did you begin this sport?
He took up the sport in 2004 in the French region of Normandy. Six months later, he won his first national title.
Why this sport?
He first tried a marathon after making a bet with a friend, and then someone from the French national athletics federation advised him to try sprinting. Prior to athletics he was involved in swimming.
Club / Team
E EA Auvergne Rhone-Alpes: France
Name of coach
Olivier Lund, FRA

Memorable sporting achievement
Winning gold at the 2011 World Championships in Christchurch, New Zealand, competing in two finals at the 2012 Paralympic Games in London, and winning silver and bronze at the 2014 European Championships in Swansea, Wales. (Athlete, 23 Oct 2015)
Most influential person in career
His coach and his fiancee. (Athlete, 23 Oct 2015)
Hero / Idol
French judoka Teddy Riner, French rally driver Sebastien Loeb. (Athlete, 23 Oct 2015)
Injuries
He had been troubled by shoulder problems in the two years leading up to the 2016 Paralympic Games in Rio de Janeiro. After the Games, he had surgery on the shoulder. (athletes.sncf.com, 12 Oct 2016; dahlir43.fr, 18 Sep 2016)
Impairment
He was born with an impairment that weakened his legs. (leparisien.fr, 25 Nov 2011)