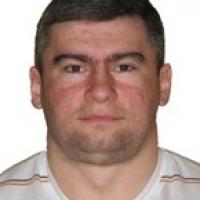 When and where did you begin this sport?
He took up the sport in 2005 in Bryansk, Russian Federation.
Why this sport?
He always had weights at home since he was a child, so his friends advised him to take up powerlifting.

Hobbies
Wood carving. (Athlete, 23 Apr 2016)
Injuries
He broke his leg three months before the 2008 Paralympic Games in Beijing. (news.nashbryansk.ru, 16 Oct 2008)
Awards and honours
On the eve of the 2014 Olympic Winter Games in Sochi, he took part in the Olympic torch relay in his hometown of Bryansk, Russian Federation. (torchrelay.sochi2014.com, 15 Jan 2014)

He holds the title of Master of Sport of International Class in the Russian Federation. (fpri.ru, 28 Dec 2015)

SANCTION
In May 2017 the International Paralympic Committee [IPC] announced that he had been suspended from competition for two years after he was found guilty of a second doping violation. He tested positive for the banned substance metandienone at an out-of-competition test in June 2016. Despite it being his second offence, he was given a reduced sanction because he was able to prove that the supplement he was using was contaminated. (paralympic.org, 30 May 2017)

FURTHER EDUCATION
In 2008 he graduated in law from the Oryol Regional Academy of Public Administration. In 2014 he graduated in coaching from the branch of Lesgaft National State University of Physical Education, Sport and Health in Bryansk, Russian Federation. (ibryansk.ru, 10 Dec 2008; Athlete, 23 Apr 2016)