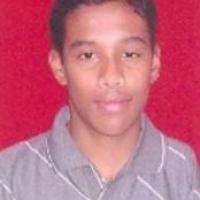 When and where did you begin this sport?
He took up the sport at age nine at the PM Swimming Centre in Bangalore, India.
Why this sport?
"The more I swam, the more I loved it."
Name of coach
John Christopher [personal], IND, from 2004

He competed with an injured shoulder at the 2014 Asian Para Games in Incheon, Republic of Korea. (timesofindia.indiatimes.com, 27 Oct 2014)

In 2009 he suffered a shoulder injury that kept him out of action for more than two months. (dnaindia.com, 14 Apr 2010)
Sporting philosophy / motto
"The world's greatest achievers have been those who have always stayed focused on their goals and have been consistent in their efforts." (gamatics.in, 19 Sep 2015)
Awards and honours
He was presented with the Arjuna Award in 2015 by Shri Pranab Mukherjee, the president of India. (gamatics.in, 19 Sep 2015)

In 2013 he received a Rajyotsava Award from the Karnataka Government in India, and a Kempegowda Award from the Bruhat Bangalore Mahanagara Palike [BBMP] in India. (gamatics.in, 19 Sep 2015)

He received the 2004 National Child Award for Exceptional Achievement from the government of India. (gamatics.in, 19 Sep 2015)
Milestones
He became the first Indian Para athlete to win six medals at one edition of the Asian Para Games, after winning one silver and five bronze medals at the 2014 Asian Para Games in Incheon, Republic of Korea. (sportskeeda.com, 27 Oct 2014)
Impairment
He was born with an underdeveloped left hand. (Athlete, 19 Jul 2015)
Other information
OCCUPATION
He is the co-founder and director of online swim store Gamatics India, based in Bangalore. In 2017 he was named by Forbes magazine as one of their 'Superachievers' under the age of 30 in Asia. (Facebook profile, 02 Feb 2019; espn.co.uk, 15 Aug 2017; gamatics.in, 02 Nov 2015)

COACH
He coaches swimming at the Pooja Aquatics Centre in Bangalore, India. "I am excited to be a coach, but it has come with a price. I am now responsible for various other athletes and the stress is far more. I am not sleeping as much as I used to but the dream is further enhanced. I might have reached the Paralympics, now I want one of my students to win a medal there." (thriveglobal.in, 05 Feb 2019; Facebook profile, 02 Feb 2019)

THOUGHTS OF RETIREMENT
In 2014 he was contemplating retirement after missing out on a medal at the 2014 Commonwealth Games in Glasgow, Scotland. He decided not to retire after former Indian cricket captain Rahul Dravid persuaded him to keep swimming competitively. "I was having a lot of trouble concentrating on my career and Rahul's wise words helped me a lot. We were in touch through emails and his tips on how to build partnerships and be a team player has definitely helped me become a better sportsperson." (timesofindia.indiatimes.com, 27 Oct 2014)