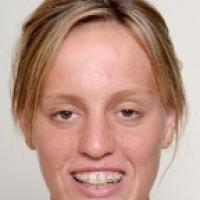 When and where did you begin this sport?
She began swimming at age nine.
Why this sport?
She swam before her accident and swimming was part of her rehabilitation after. "My first gala after my accident was a complete disaster. People I use to beat were now beating me. I was devastated but I knew that giving up on my dream was not an option. My physio at the rehabilitation centre suggested that I try competing as a disabled athlete. I was completely against it because I did not see myself as a disabled person. After many tears my mum finally convinced me to swim a race in the disabled category."
Club / Team
Seagulls Swimming Club: Pinetown, RSA
Name of coach
Graham Hill [club]; Delon Dannhauser [national]

Nicknames
Fuddy (heslopsports.co.za, 04 Jun 2016)
Hobbies
Spending time at the beach, singing. (sascoc.co.za, 13 Apr 2015; heslopsports.co.za, 04 Jun 2016)
Injuries
She underwent shoulder surgery in September 2013 and again in June 2014. She returned to competition in April at the 2015 National Championships in Durban, South Africa. (sascoc.co.za, 13 Apr 2015)
Awards and honours
She was South Africa's flag bearer at the opening ceremony of the 2009 Maccabiah Games in Israel. (shireensapiro.com, 15 Sep 2012)
Other sports
Prior to her accident she was a member of the South Africa national junior able-bodied swimming team. (haaretz.com, 17 Jul 2009)
Impairment
In 2004 her right leg was severed and her pelvic girdle was shattered into nine pieces by a speedboat propeller. She had been water skiing and fell, and another boater did not see her in the water and ran over her. (haaretz.com, 17 Jul 2009; roadtolondon2012.co.za, 10 Aug 2011)
Other information
PARALYMPIC DISQUALIFICATION
She was disqualified from the S10 100m butterfly heats at the 2012 Paralympic Games in London because she showed up two minutes late to the first call room. (mg.co.za, 01 Sep 2012)