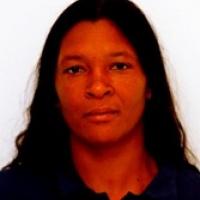 When and where did you begin this sport?
She began the sport at age 24 in Brasilia, Brazil.
Why this sport?
Athletics coach Manoel Ramos got her into throwing, initially the discus.
Club / Team
Instituto Elisangela Maria Adriano [IEMA]: São Caetano do Sul, BRA
Name of coach
Amaury Verissimo [national], BRA; Domingos Guimaraes [personal], BRA, from 2008

She carried the Olympic torch through Brasilia, Brazil during the relay for the 2016 Olympic Games in Rio de Janeiro. (portalradioreporter.com.br, 03 May 2016)

In 2008 she won the Instituto Superar's Breakthrough Award. (Athlete, 17 Feb 2011)
Impairment
She was born prematurely and has hemiplegia, which affects muscle movement on her left side. Her parents did not detect the problem until she was age five and it was too late for treatment. (campus.fac.unb.br, 13 Mar 2013)