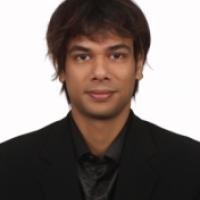 When and where did you begin this sport?
He first used an air rifle when he was a schoolboy. "It was my cousin's rifle. We had used a compass to make the target circles. The shot hit the compass mark."
Why this sport?
"Like every kid, I loved playing with rifles. I never played with pistols, but only with rifles."
Training Regime
"I spend almost eight hours in the range [per day], including physical training."
Handedness
Shoots right

Hobbies
Meditation, yoga. (tv.mathrubhumi.com, 06 Nov 2019)
Most influential person in career
His mother. (hindu.com, 26 Mar 2011)
Sporting philosophy / motto
"Dream on and don't get into a stagnant mode." (hindu.com, 26 Mar 2011)
Other sports
Prior to his accident he was a professional kickboxing instructor and held a black belt in the sport. (hindu.com, 26 Mar 2011)
Ambitions
To win a gold medal at the 2020 Paralympic Games in Tokyo. (timesofindia.indiatimes.com, 09 Nov 2019; tv.mathrubhumi.com, 06 Nov 2019)
Impairment
He has paraplegia as the result of a motorcycle accident in 2002. (hindu.com, 26 Mar 2011)
Other information
COVID-19 IMPACT
He was forced to relocate and set up a new shooting range in order to train during the COVID-19 pandemic in 2020. "With all shooting ranges shut, the lockdown restrictions made practice impossible. But that didn't dissuade me and I set up an indoor shooting range at home. I moved to a secluded place at Vithura [India] to continue with my training. Setting up the shooting range and moving to a new place were a daunting task as I did it all on my own. The lockdown was a very fruitful time. During training, I beat my personal best at least three times." (newindianexpress.com, 06 Feb 2021)

SELF-TAUGHT
He learned the basics of shooting from books before his talent was spotted and he began receiving formal coaching. "I won the gold in 50m men's prone air rifle shooting in the Kerala State Shooting Championship in 2016. It was the first time a Para shooter had won that contest while competing with mainstream [able-bodied] shooters. After that the state government gave funds to go to Belarus and international coach Sergei Martynov became my teacher." (timesofindia.indiatimes.com, 18 Apr 2019)