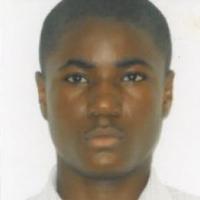 When and where did you begin this sport?
He took up the sport at age 12.
Why this sport?
After winning the 100m race at his school's sports day, he was referred to the 'Playground to Podium' scheme, a programme which aimed to prepare British Para athletes to compete at the 2012 Paralympic Games in London.
Club / Team
Kingston Athletics Club and Polytechnic Harriers: London, ENG
Name of coach
Richard Holt [club]

Hero / Idol
Irish Para sprinter Jason Smyth, British Para sprinter Jonnie Peacock. (standard.co.uk, 07 Dec 2015)
Sporting philosophy / motto
"The less sight I have, the more imagination I gain, because what you see is what you see and what you don't see is when the magic begins." (radiotimes.com, 02 Oct 2019)
Ambitions
To compete at the 2020 Paralympic Games in Tokyo. (standard.co.uk, 07 Dec 2015)
Impairment
He was born with retinitis pigmentosa, an eye condition that causes a progressive loss of vision. He cannot see out of his right eye, and has partial vision in his left eye. (standard.co.uk, 07 Dec 2015; kamalhyman.co.uk, 24 Feb 2016)
Other information
TV APPEARANCES
In 2019 he featured as a contestant on series 15 of the British business-related reality television show 'The Apprentice'. In 2017 he also appeared on the British television dating show 'The Undateables'. (Twitter profile, 24 Jul 2020; thesun.co.uk, 23 Oct 2019; radiotimes.com, 02 Oct 2019)

PATRON
He has served as a patron for the British Wireless for the Blind Fund, an organisation which provides audio equipment to people with visual impairments. (blind.org.uk, 01 Jan 2019)

GUINEA TO ENGLAND
Born in Guinea, he moved to England at age five with his family. "I moved here [England] as an asylum seeker for two reasons. The first was because there was political disturbance in Guinea, and the second reason was because my school didn't have the facilities to give me a good enough education. When I went in [to school] I couldn't actually read any of the materials, I couldn't read the books, I couldn't read the blackboard, and the teachers were like literally we can't help you. My parents wanted me to have a good education and that was the initial reason why I moved to the UK." (YouTube channel, 30 Jul 2020)