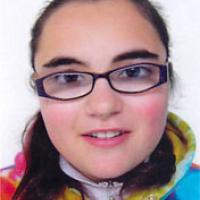 When and where did you begin this sport?
She began skiing at age four with the Adaptive Sports Foundation in Windham, NY, United States of America.
Why this sport?
Her parents wanted a way for the family to do a fun sport together. "I love the freedom of skiing fast."
Club / Team
Adaptive Sports Foundation : United States
Name of coach
Tony McAllister, USA
Training Regime
She cross-trains in equestrian during the off-season.

In November 2017 she tore the medial collateral ligament [MCL] in her knee. (IPC, 10 Feb 2018)
Sporting philosophy / motto
"Partially sighted, totally focused." (stacimannella.com, 28 Jan 2017)
Awards and honours
She was named Female Athlete of the Month for January 2016 by the United States Olympic Committee [USOC]. (newjerseyhills.com, 22 Feb 2016)
Other sports
She has competed in equestrian at university level in the United States of America. (teamusa.org, 23 Feb 2016)
Impairment
She was born with achromatopsia, a genetic condition that results in serious light sensitivity, poor visual acuity and partial colour blindness. (IPC, 10 Feb 2018; newjerseyhills.com, 22 Feb 2016)
Other information
SKIING BREAK
After competing at the 2014 Paralympic Winter Games in Sochi, she took a year away from the sport to focus on her studies at Dartmouth College in Hanover, NH, United States of America. (teamusa.org, 23 Feb 2016)