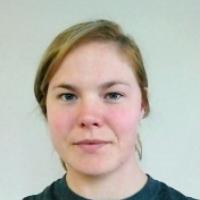 Why this sport?
As she lived in Whitehorse, YK, Canada, she felt taking up skiing was the natural thing to do.

Injuries
She missed four weeks of training due to illness in the lead-up to the 2002 Para-Swimming World Championships. (Swimming Canada 2004 Paralympic Team, 13 Aug 2004)
Sporting philosophy / motto
"Anyone can get out there and compete in sports, even if it's not at the Paralympic level." (CPC, 18 Jun 2007)
Awards and honours
In November 2013 she was inducted into the Canadian Disability Hall of Fame. (bramptonguardian.com, 30 Nov 2013)

She served as an ambassador for the 2007 Parapan American Games in Rio de Janeiro, Brazil, and travelled to Rio and Sao Paulo in March 2007 to raise awareness of the need for equal sporting opportunities for all athletes. (paralympic.ca, 25 Mar 2010)

In 2001 she was named Swimming Canada's Female Athlete of the Year for swimmers with an impairment. (Swimming Canada, 26 Aug 2010)
Other sports
She has also represented Canada in para-swimming. (bramptonguardian.com, 30 Nov 2013)
Impairment
She was born without her right leg and hip. (sharingthedream.gov.bc.ca, 2008)
Other information
RETIRMENT
She retired from competitive swimming in 2010. She retired from competitive para-cross country skiing so that she could focus on working for the Canadian Paralympic Committee. (bramptonguardian.com, 30 Nov 2013; paralympic.ca, 21 Oct 2014)

PARALYMPIC AMBASSADOR
She is an ambassador for the Canadian Paralympic Association. (bramptonguardian.com, 30 Nov 2013)