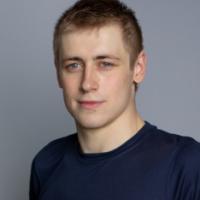 When and where did you begin this sport?
He began Para swimming in 2014.
Club / Team
University of Edinburgh Swim Team: Scotland
Name of coach
Chris Jones [club]; Rob Aubry [national], GBR

Hobbies
Bouldering, indoor rock climbing. (Athlete, 08 Sep 2019)
Most influential person in career
British Para sprinter [and his sister] Elizabeth Clegg. (Athlete, 08 Sep 2019)
Hero / Idol
British Para sprinter [and his sister] Elizabeth Clegg. (Athlete, 08 Sep 2019)
Awards and honours
In 2019 he was named Male Athlete of the Year and Para Athlete of the Year by the City of Sunderland club in England. (cityofsunderlandasc.co.uk, 26 Oct 2019)
Famous relatives
His siblings Elizabeth [athletics] and James [swimming] have represented Great Britain at the Paralympic Games. Elizabeth won gold in both the women's T11 100m and T11 200m at the 2016 Games in Rio de Janeiro, and also competed at the 2008, 2012 and 2020 Games, while James claimed bronze in the men's S12 100m butterfly at the 2012 Games in London. (SportsDeskOnline, 11 May 2022; independentsportsnews.com, 03 Feb 2020; scottishswimming.com, 28 Jul 2014)
Ambitions
To compete at the 2024 Paralympic Games in Paris. (bbc.com, 20 Feb 2022)
Impairment
At age nine he was diagnosed with Stargardt disease, a deteriorating genetic eye condition that affects central vision. His siblings Elizabeth and James are also affected by the condition. (radiotimes.com, 12 Sep 2016)
Other information
TECHNIQUE
In order to keep his bearings in the pool he counts his strokes. "For swimming, there's not really that much I can see. So there's flags when you're doing backstroke to kind of show you how close you are to the pool [edge] and I can't see them at all, so I have to rely on count for that, I just count my strokes each length. And over the years I've kind of got that very, very consistent so I know where I am in the pool with each stroke I take. Every now and then it doesn't play out very well, and I sometimes miss a turn or nearly hit my head off the wall, which isn't always fun." (Bruce McKenzie YouTube channel, 03 Sep 2019)

SIBLINGS
He says his relationships with his brother and sister have been influenced by his siblings' respective sports. "We [he and brother James] had a lot of rivalry, especially when we swam at the same time because I was always trying to break his British records and things like that. But it was always really good for me to have my sister around, especially for Rio [in 2016] because in my first couple of races I was very nervous, so it was kind of nice having her in the Paralympic village with me. Still today I call my sister for advice on how to deal with certain situations, which is really nice to have." (Bruce McKenzie YouTube channel, 03 Sep 2019)