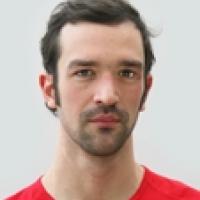 When and where did you begin this sport?
He began swimming in 1989 at age three at the Kortemarkse Flippers Zwemclub in Belgium.
Why this sport?
On his first family holiday he could not resist jumping into the deep end of the swimming pool and almost drowned. After the holiday his parents sent him to swimming school.
Club / Team
Royal Ostend Swimming Club [ROSC]: Belgium
Name of coach
Lieve Peeters [national]; Gregory Planckaert [national]

Most influential person in career
His parents, coaches and friends. (Athlete, 29 Dec 2010)
Sporting philosophy / motto
"Try your best and look on the bright side." (Athlete, 29 Dec 2010)
Awards and honours
He was Belgium's flag bearer at the opening ceremony of the 2016 Paralympic Games in Rio de Janeiro. (myinfo.rio2016.com, 06 Sep 2016)

He was named the Belgian Paralympic Athlete of the Year in 2010. (paralympic.org, 20 Dec 2010)
Other sports
He has competed in national para-triathlons. (bestofeuropehandbiketeam.eu, 31 Mar 2014)
Impairment
He had his leg amputated at age 11 after he was diagnosed with cancer in his ankle and foot. (gripvzw.be, 19 Mar 2010)
Other information
OCCUPATION
He works as a sports secretary for Royal Ostend Swimming Club [ROSC] in Belgium. (ostendswimming.be, 2016)

COUNCIL
He participated in the 2006 elections for his city council in Belgium and was elected representing the Liberal Democrats [OpenVLD]. (Athlete, 14 Jun 2011)