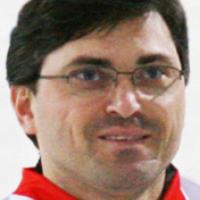 When and where did you begin this sport?
He took up the sport in 1995 in Chicago, IL, United States of America.
Why this sport?
He tried several Para sports after moving to the United States of America but liked ice hockey the most. "During a ski camp I met the father of a Para ice hockey player. And he invited me to a training session in Chicago. I went there, sat on sledge and it turned out that I was faster than players who had trained for several years."
Club / Team
IKS Atak: Elblag, POL
Name of coach
Tomasz Wozny [national], POL
Preferred position / style / stance / technique
Defence

Nicknames
Sly (Facebook profile, 16 Feb 2015)
Hobbies
Playing the guitar. (Athlete, 03 Jan 2019)
Memorable sporting achievement
Being part of the United States of America gold medal winning team at the 2002 Paralympic Winter Games in Salt Lake City. (Fundusze Europejskie YouTube channel, 01 Dec 2020; portel.pl, 07 Nov 2020)
Injuries
He underwent surgery on both of his legs in 2013 to reduce muscle contracture. (Facebook profile, 16 Feb 2015)
Sporting philosophy / motto
"Hockey is my hobby and my life." (Athlete, 03 Jan 2019)
Awards and honours
In 2020 he was presented with the Golden Cross of Merit by the president of Poland. (radioolsztyn.pl, 10 Dec 2020; Facebook profile, 09 Dec 2020)

While representing the United States of America, he was named Most Valuable Player [MVP] of the US team that won ice hockey gold at the 2002 Paralympic Winter Games in Salt Lake City. (paralympic.org, 23 Nov 2012)
Other sports
He competed in both cross-country skiing and biathlon at the 2010 Paralympic Winter Games in Vancouver. (SportsDeskOnline, 07 Jan 2021; portel.pl, 07 Nov 2020)
Milestones
At the 2002 Paralympic Winter Games in Salt Lake City he scored 11 goals and recorded 18 points which, at the time, was the most goals and points scored by a player at a single edition of the Games. His record of 11 goals was equalled by US player Declan Farmer at the 2018 Games in Pyeongchang. (Fundusze Europejskie YouTube channel, 01 Dec 2020; usahockey.com, 18 Mar 2018)
Ambitions
To win a medal at the European championships, world championships, and Paralympic Winter Games. (Athlete, 03 Jan 2019)
Impairment
He was born with spina bifida. At age 10 his legs became weaker and he began using crutches to assist his mobility. (Vancouver, 12 Feb 2010; dziennikelblaski.pl, 06 Jan 2010)
Other information
REPRESENTING THE USA AND POLAND
He is a citizen of both Poland and the United States of America, as his grandmother was born in the United States. He moved to Chicago with his parents in 1994, and represented the United States of America in ice hockey at the 2002 Paralympic Winter Games in Salt Lake City, where they won a gold medal. He returned to Poland in 2006 following an invite from the IKS Atak club to create the first Para ice hockey team in Poland. "I learned, played, and won the gold medal with the US team and I am very much grateful for all of it. However, I've always wanted to share my sledge hockey knowledge with Poland and when I was contacted by IKS Atak from Elblag to start the sport and help it grow, it was an easy answer." (Fundusze Europejskie YouTube channel, 01 Dec 2020; parasport.se, 07 Jun 2016; portel.pl, 31 Dec 2015; sportowahistoria.pl, 13 Dec 2014; paralympic.org, 23 Nov 2012; Vancouver, 12 Feb 2010; dziennikelblaski.pl, 06 Jan 2010)

SKI CAREER
He represented Poland in cross-country skiing and biathlon at the 2010 Paralympic Winter Games in Vancouver after he was encouraged to try the sport by a friend. "By a chance I met Jan Kolodziej, who I knew from Busko-Zdroj [rehabilitation centre in Poland]. He was a member of the Para cross-country skiing national team. I encouraged him to try Para ice hockey and he motivated me to try cross-country skiing. I thought that it would be easy, as the sit-skiing technique would be similar to sledge hockey, but it wasn't. I worked hard and earned the Paralympic quota. At the Paralympic Games in long distances and in biathlon I was at the bottom of the result list, but in my favourite 10km event I fell down at high speed breaking the ski and I was unable to finish the race. However, I had a time which was on course for a medal position. After the Games I returned to hockey." (portel.pl, 07 Nov 2020)