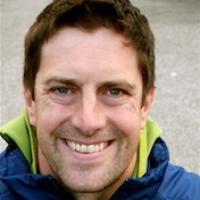 When and where did you begin this sport?
He first tried skiing at age nine. He took up Para alpine skiing after his accident at age 34.
Why this sport?
He was made aware of Para alpine skiing while recovering from his accident by a former patient. "He told me that I could still go skiing, that he'd just been and that was the switch. I then decided that I would actually not just go skiing but that I was going to represent my country and go to the Paralympics. And that then became my focus and my drive."

He broke his right foot after crashing during the 2007 Meribel downhill race in France. (Athlete, 29 Dec 2010)

In 2005 he suffered a broken neck after colliding with another skier. (Athlete, 29 Dec 2010)
Sporting philosophy / motto
"Love life, live life." (Athlete, 29 Dec 2010)
Awards and honours
He took part in the torch relay ahead of the 2012 Olympic Games in London, carrying the torch through Bath, England. (familyskinews.com, 23 May 2012)
Other sports
He has competed in international Para motorcycle racing, and won 600cc world titles in the paralysed category in 2015 and 2018. He has also competed in able-bodied motorcycle racing in the United Kingdom. (LinkedIn profile, 01 Jan 2018; motorcyclenews.com, 22 Jun 2015)
Impairment
He has paraplegia from the chest down after he was involved in a motorcycle accident in March 2003 that led to his spine being shattered and his neck being broken in several places. His odds of survival were estimated at 1%. He was told he would spend up to two years in hospital upon admission, but he was discharged just over six months later. In less than a year, he was back on the ski slopes in a specially adapted sit-ski. (britishdisabledskiteam.co.uk, 13 Dec 2010, bbc.co.uk, 03 Feb 2009)
Other information
CHARITY WORK
In 2011 he founded a charity called 'The Bike Experience', which teaches motorcyclists with impairments how to ride again. "We show them that what they thought was 'impossible' is actually possible. It changes their outlook on life, allowing them to see that all other goals are well within their grasp. It improves self-esteem, balance, co-ordination, independence and self-belief. All those who come, as riders or volunteers, leave from the day with something magical and unique to this groundbreaking charity. I assess each rider and help to plan their experience to give maximum enjoyment and success. Each rider has different needs and requires a very specific approach which is tailored to their own needs." (LinkedIn profile, 01 Jan 2018)

CHANGING VIEWS ON PARA ATHLETES
He believes the 2012 Paralympic Games in London were a focal point in changing the perception of Para athletes and growing the profile of Paralympians. "I think it has shown a wider audience the high levels of commitment, dedication and performance that the Paralympic Games demand. After London 2012 I was in a supermarket and a young boy spotted me. Usually kids stare and then ask their mother why I can't walk. This time the boy came up to me and asked me if I was a Paralympian and whether I competed in sport. It was fantastic, the child saw a potential athlete, not someone that just couldn't walk. His perception has been changed forever." (disabilityhorizons.com, 18 Feb 2013)

RETAINED IN ROYAL NAVY
As a young man he joined the Royal Navy and its ski team, leaving after nine years to become a physical education teacher. In 2006, he became the first officer to be retained in the Armed Forces following paralysis, and was based at HMS Flying Fox in Bristol, England, as a lieutenant in the Royal Navy Reserves. (britishdisabledskiteam.co.uk, 13 Dec 2010)