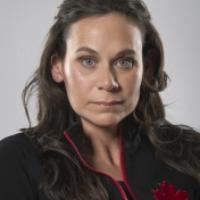 When and where did you begin this sport?
She began competing in Para swimming in late 2014, after switching from Para triathlon.
Why this sport?
Her Para triathlon coach recommended that she switch to swimming because her category wasn't included in the 2016 Paralympic Games in Rio de Janeiro.
Club / Team
Red Deer Catalina Swim Club: Canada
Name of coach
Lucien Zucchi [club]; Mandi Smith [club]; Wayne Lomas [national]
Training Regime
She trains up to three hours a day, five days a week.

Injuries
She suffered an injury to her foot in late 2016 which kept her out of the water for two weeks. She returned to competition in April 2017. (rdnewsnow.com, 20 Mar 2017; Twitter profile, 02 Apr 2017)
Sporting philosophy / motto
"Passion equals victory." (paralympic.ca, 04 Jun 2021)
Awards and honours
She has been named Alberta Para Swimmer of the Year in Canada and has been presented with a Woman in Excellence Award. (tammycunnington.com, 01 Jan 2020)
Other sports
She has competed in Para triathlon at international level and has also played wheelchair basketball at national level. (triathlon.org, 2014; reddeeradvocate.com, 20 Oct 2012)
Ambitions
To reach at least two finals at the 2020 Paralympic Games in Tokyo. (rdnewsnow.com, 04 Jun 2021)
Impairment
At age six she was hit by debris [a propeller] after two planes collided at an air show in Ponoka, AB, Canada. Her injuries resulted in muscle and nerve damage through her hips and legs. She retained full use of her right arm, core and shoulders. (paralympic.ca, 03 Aug 2015; swimming.ca, 01 Sep 2016)
Other information
RETIREMENT THOUGHTS
She admitted disappointment at her results at the 2016 Paralympic Games in Rio de Janeiro, and says she considered retirement afterwards. However, she was persuaded to continue competing following a welcome home celebration for Canadian Olympic and Paralympic athletes. "When I went to the celebration, they had the Olympic and Paralympic athletes together and so I had an opportunity to talk with some of the Olympic athletes who had had disappointing games as well. It was nice to have that camaraderie together and talk about it. That was really a cathartic experience to go through it with someone who felt the same way." (rdnewsnow.com, 20 Mar 2017; olympic.ca, 02 Nov 2016)

POST-RIO FILM
Her life story was the subject of a short film called 'Power On Water' that received two awards at the 2019 Central Alberta Film Festival. The film portrays her life and journey to the 2016 Paralympic Games in Rio de Janeiro, "It's a little bit more focused on Rio and what it took for me to get to the Paralympics. But it's also about the full journey from the time I was injured when I was six. There's also a conversation about how Rio didn't go how I wanted, and how I handled it afterwards and things like that." (reddeerexpress.com, 11 Feb 2019; thecacheproject.ca, 01 Jan 2016)