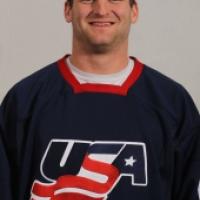 When and where did you begin this sport?
He began playing Para ice hockey in 2005 through the Northeast Passage programme at the University of New Hampshire in Durham, NH, United States.
Why this sport?
"I remember being out there, just like when I learned to skate on two feet. It’s the same thing, you have to learn all the motor skills all over again. It was much harder than stand-up hockey when I started out. I worked hard at it and I loved it."
Preferred position / style / stance / technique
Defence

He was named Best Defenceman at the 2013 World Championships A-Pool in Goyang, Republic of Korea. (paralympic.org, 21 Apr 2013)

He was voted the International Paralympic Committee [IPC] Athlete of the Month for December 2012. (keirradnedge.com, 16 Jan 2013)

In 2010 he was named United States Olympic Committee [USOC] Paralympic Sportsman of the Year, and also part of USOC's Paralympic Team of the Year. (usahockey.com, 21 Jan 2011)

He was named Best Defenceman at the 2010 Paralympic Winter Games in Vancouver. (paralympic.org, 12 Dec 2013)

He was named Most Valuable Player of the 2007 World Challenge in Kelowna, BC, Canada. (usahockey.com, 02 Feb 2014)
Other sports
He played able-bodied ice hockey at junior Olympic level. (teamusa.org, 04 Apr 2012)
Impairment
He damaged the L1 vertebra in his spinal cord after hitting the boards during an ice hockey game in 2002. (Athlete, 06 Mar 2014)
Other information
RETIREMENT
He retired from international Para ice hockey in 2014. (Facebook page, 07 Nov 2016; taylorchace.com, 2017)

OCCUPATION
He works as an athletic performance coach at Exeter Hospital in Hampton, NH, United States of America. He became a certified strength and conditioning specialist through the National Strength and Conditioning Association. (Facebook profile, 30 Jun 2017; taylorchace.com, 2017)