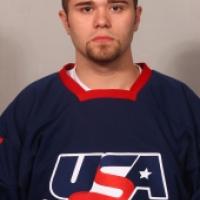 When and where did you begin this sport?
He began the sport at age 15 in Dallas, TX, United States.
Why this sport?
He was introduced to the sport by US Paralympian Lonnie Hannah.
Training Regime
In November 2011 he discovered 'CrossFit' training at the Omega CrossFit gym in Plano, TX, United States. The gym's owner set up a specific training programme for him. Lipsett says this has "greatly improved" his physical condition on the ice, particularly towards the end of a game. He trains two times per day for three days a week. Waking up at 4:30am for the first session, with the second session taking place after a day's work.
Preferred position / style / stance / technique
Forward

Nicknames
Brit ["Because of my disease which is also known as 'brittle bones'"]. (Athlete, 04 Jan 2011)
Hobbies
Spending time with his wife, training for wheelchair marathons. (Athlete, 04 Jan 2011)
Memorable sporting achievement
Winning the gold medal at the 2010 Paralympic Winter Games in Vancouver. (Athlete, 06 Mar 2014)
Most influential person in career
US Paralympian Lonnie Hannah, who introduced him to the sport when he was a teenager. (Athlete, 06 Mar 2014)
Hero / Idol
US basketball player LeBron James, US ice hockey player Patrick Kane, US racing drive Joey Logano. (Athlete, 06 Mar 2014)
Injuries
He broke his right tibia two months before the 2012 World Championships, but recovered in time to play and led the tournament in goals, including a hat-trick in the gold medal game. (crossfit.com, 12 Sep 2012)

Due to his condition, by September 2012 he had broken his nose 105 times, and required 30 surgical operations to help stabilise the bones in his legs. (crossfit.com, 12 Sep 2012)
Sporting philosophy / motto
"The only disability in life is a bad attitude." (Athlete, 06 Mar 2014)
Impairment
He has a genetic bone disorder called osteogenesis imperfecta, sometimes known as 'brittle bone disease'. "The disease mostly affected my legs because they are what broke first. I used my upper body so much to get around when I was younger that the muscles developed rather quickly to protect the bones in my upper body, whereas the muscles in my legs were never able to fully develop because they started breaking when I was about one and a half years old." (crossfit.com, 12 Sep 2012; VANOC, 12 Feb 2010)
Other information
RETIREMENT
He retired from competitive ice-sledge hockey in 2014. (teamusa.org, 17 Dec 2014)

OCCUPATION
In October 2012 he began working as a portfolio manager at US Trust, Bank of America in Dallas, TX, United States. Alongside his work he is also studying for a masters in investment management at University of Texas, and planned to graduate in 2014. (Athlete, 06 Mar 2014; usahockey.com, 02 Feb 2014; Facebook profile, 25 Jan 2013)