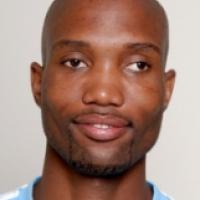 When and where did you begin this sport?
He began the sport in 1993 at school.
Why this sport?
To overcome his impairment and become mentally and physically stronger. He used to play several sports, but a physiotherapist encouraged him to just focus on one and excel in it.
Name of coach
Tshakile Nzimande, RSA, from 2013

Year
2000
Competing for
South Africa
Location
London, ON, CAN

He is a recipient of the Order of Ikhamanga, an award given by the government to South Africans who excel in their field. (thenewage.co.za, 18 Jan 2012)
Impairment
At age four he was involved in a car accident that left him with cerebral palsy. (thenewage.co.za, 18 Jan 2012)
Other information
OCCUPATION
He works as a school sport promotion officer for the Free State Department of Sports, Arts, Culture and Recreation in Bloemfontein, South Africa. (Facebook profile, 11 Apr 2016)

OTHER STUDIES
He has studied business management at Metro College in Bloemfontein. (Facebook profile, 11 Apr 2016)