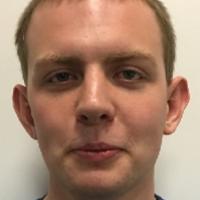 When and where did you begin this sport?
He took up the sport at age nine in Hobbs, NM, United States of America.
Why this sport?
"My mother did not know how to swim so she and my father put myself and all my siblings into swim lessons and then joined the team immediately after. My mother wanted myself and my siblings to learn to swim."
Training Regime
He spends roughly 18 hours in the pool each week, and does up to four hours of strength and conditioning work.

Nicknames
Mr 500 [he lost count of how many laps he had done in the 400m freestyle at the 2015 World Championships in Glasgow, Scotland, so he swam an extra lap to be sure he had finished the race, covering 500m in total]. (Athlete, 07 Jan 2016)
Hobbies
Watching movies, playing musical instruments. (podomatic.com, 27 Mar 2017; Athlete, 07 Jan 2016)
Memorable sporting achievement
Winning bronze in the S11 400m freestyle at the 2015 World Championships in Glasgow, Scotland. (Athlete, 07 Jan 2016)
Most influential person in career
His father Shawn Drake. (Athlete, 07 Jan 2016)
Hero / Idol
His father Shawn Drake. (Athlete, 07 Jan 2016)
Injuries
He underwent hernia surgery in September 2015 after injuring himself while doing abdominal work. He returned to the pool three months later. He had a further operation on his hernia in February 2017 after aggravating the initial injury. (Facebook page, 27 Feb 2017; Athlete, 07 Jan 2016)
Superstitions / Rituals / Beliefs
The night before a competition he watches the movie Talladega Nights, plays an instrument and listens to music. (Athlete, 07 Jan 2016; teamusa.org, 19 Mar 2015)
Sporting philosophy / motto
"Be happy but don't be content." (podomatic.com, 27 Mar 2017)
Awards and honours
His hometown of Hobbs, NM, United States of America, declared 17 October 2016 'Tharon Drake Day' in recognition of his achievements at the 2016 Paralympic Games in Rio de Janeiro. (hobbsnm.org, 17 Oct 2016)
Famous relatives
His father Shawn has worked as a high school swimming coach. (teamusa.org, 19 Mar 2015)
Ambitions
To compete at the 2020 Paralympic Games in Tokyo. (WSOC Sports YouTube channel, 10 Dec 2018)
Impairment
In 2007 he was taken to hospital, where he was diagnosed with amnesia as a result of vaccinations he had received. In 2008 his eyesight began to deteriorate due to methylation disorder. The condition means his body does not absorb vitamins properly, and he was declared completely blind soon after. (gofundme.com, 07 Jul 2016; teamusa.org, 26 Oct 2013; varsity.oaoa.com, 08 Jan 2011)
Other information
COACHING
In April 2018 he was appointed an assistant swimming coach at Catawba College in Salisbury, NC, United States of America. As he has a vision impairment, he uses his hearing to help train the athletes he coaches. "In swimming we are always looking for something new. Sometimes I even think it's an advantage to not rely on your eyes for feedback. When someone enters [the water] thumb-first [while swimming], it sounds like a cannon ball. I can correct someone's catch in this way. I remember the first time I called someone out on hand position, then I called out another person for tugging on the lane line. I could hear the breathing pattern change, the way in which they were astounded. Now they don't even think about it. They come up and ask me what I heard in their swims. I can't wait for the moment when a blind coach is looked at as just another coach." (swimmingworldmagazine.com, 10 Jan 2019, 15 Apr 2018; ncaa.com, 04 Oct 2018)

NOT THE NEARLY MAN
He was named a reserve for the US team that travelled to the 2012 Paralympic Games in London. He made a pact with himself that he would be a full member of the team four years later, and he went on to win two silver medals at the 2016 Games in Rio de Janeiro. "I said to my father, 'I'm tired of being the bubble guy'. The bubble guy is the guy who either barely makes it into the team or barely misses out. I said, 'You know, I'm going to apply to live at the Olympic Training Center [in Colorado Springs, CO, United States of America] and I'm going to be a champion'." (podomatic.com, 27 Mar 2017)