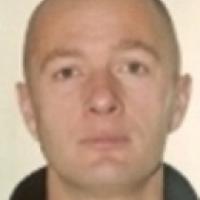 When and where did you begin this sport?
He began para-biathlon in 2005.
Why this sport?
"I was a mountain guide before my accident. So I looked for an endurance winter sport. And as I'm quite good at shooting, I found it very natural to practise biathlon."
Club / Team
Les Trolls Ski Nordique Association: France

BACKGROUND
He grew up in the Ardeche region of France [south of Saint Etienne] and treasures memories of swimming competitions in summer, and hiking and cross country skiing in winter. As a young man he climbed Mont Blanc, and completed his military service with the Chasseurs Alpins [mountain corps]. He lived for three years in Argentina, working as a chef, where he met his wife Cecilia. At 29, missing his home mountains, he returned to France to work as a mountain guide until his accident in 2004. After his accident, the trekking agency he worked for helped him retrain as a webmaster in order to continue his employment. (objectif-vancouver-2010.fr, 15 Mar 2010)