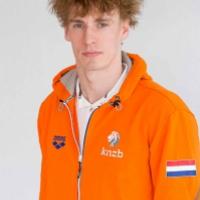 When and where did you begin this sport?
He took up swimming in late 2006 and began competing the following year.
Why this sport?
He began swimming just for rehabilitation, but then realised he was good at it and started to participate in competitions.
Club / Team
ZPC Woerden: Netherlands

Awards and honours
He was named 2015 Sportsman of the Year in Woerden, Netherlands. (Facebook page, 25 Jun 2018)
Impairment
At age 12 his left leg was amputated following the discovery of a tumour when he was undergoing surgery on his kneecap. (thijsvdend.nl, 2017; Facebook profile, 19 Sep 2018)
Other information
CAREER BREAK
He took a two-year break from competitive swimming form 2012 to 2014 after failing to qualify for the 2012 Paralympic Games in London. "After a period of two years without swimming, it started to itch again. The feeling that I had not done everything to get to the Games helped me make a new start." (thijsvdend.nl, 2017)

OTHER STUDIES
He has studied for a bachelor's degree in sports marketing at Johan Cruyff University in Amsterdam, Netherlands. He previously studied administration and public management at the University of Amsterdam. (LinkedIn profile, 01 Aug 2016)