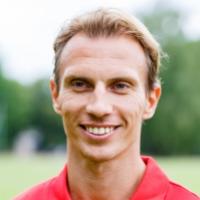 When and where did you begin this sport?
He took up the sport at age 11 while he was attending a boarding school for people with a vision impairment. He got involved in Para athletics seriously in 2003 in Berlin, Germany.
Why this sport?
He competed in several sports like swimming, table tennis and the traditional German sport of bosseln, which is similar to curling. From age 11 he concentrated on athletics and started pentathlon, before moving into sprint events. After the 2016 Paralympic Games in Rio de Janeiro he took up javelin. "I am not becoming younger, in the javelin I will be able to compete at the top a bit longer. If you believe in yourself, a lot is possible."
Club / Team
PSC Berlin: Germany
Name of coach
Ralf Otto [club], GER; Burghard Looks [personal]

In 2016 he had problems with both his calves and Achilles tendons. He withdrew from the 200m at the 2016 Paralympic Games in Rio de Janeiro due to a calf strain. (thomasulbricht.de, 04 Oct 2016)

He was named the 2013 Athlete of the Year by the German Association for the Visually Impaired. (thomasulbricht.de, 17 Jun 2013)
Ambitions
To win a medal in javelin at the 2020 Paralympic Games in Tokyo. (morgenpost.de, 17 Jun 2018)
Impairment
He has macular degeneration, an eye condition that causes a gradual loss of central vision. (teamdeutschland-paralympics.de, 27 Aug 2019)
Other information
COVID-19 IMPACT
After the postponement of the 2020 Paralympic Games in Tokyo, he said the additional year would benefit him by giving him more time to work on his javelin technique. He had switched his focus to the discipline after the 2016 Paralympic Games. "I probably wouldn't have made it [to the Olympic Games] this year [2020]. Now I've been given a year to get my technical problems under control." (az-online.de, 27 Apr 2020)

OCCUPATION
He has worked for the Federal Agency for Public Safety Digital Radio [BDBOS] in Germany. (bdbos.bund.de, 12 Feb 2018)