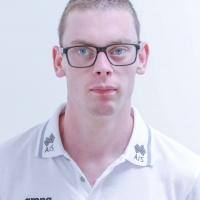 When and where did you begin this sport?
He began swimming at age four and started competing at age 10.
Why this sport?
He initially took up the sport as therapy for his cerebral palsy, but he soon began competing. "When I got classified [as a Para swimmer], the goals just shot up because I started making national times and breaking Australian age records."

Nicknames
Tim, Disko (Facebook profile, 27 Jul 2020)
Hobbies
Listening to and producing house music. (paralympic.org, 26 Feb 2019, 18 May 2018; theguardian.com, 10 Apr 2018
Memorable sporting achievement
Winning gold in the S9 100m freestyle and SB8 100m breaststroke at the 2018 Commonwealth Games in Gold Coast, QLD, Australia. (swimming.org.au, 15 Sep 2019)
Most influential person in career
Australian Para swimmers Matthew Cowdrey and Matt Levy. (paralympic.org.au, 01 Sep 2016)
Hero / Idol
Australian Para swimmer Matthew Cowdrey. (paralympic.org.au, 01 Sep 2016)
Injuries
He underwent an emergency operation on his brain in 2017. A tube he has in his head to drain excess fluid off the brain became damaged and caused him to fall into a coma. Doctors were initially unsure whether he would survive but he was able to return to training two months later. (theguardian.com, 10 Apr 2018)
Superstitions / Rituals / Beliefs
He listens to music before he competes. (paralympic.org, 18 May 2018)
Sporting philosophy / motto
"If you have a goal, try as hard as you can to achieve it." (heraldsun.com.au, 14 Nov 2014)
Awards and honours
In 2016 and 2018 he was named Multi Class Swimmer of the Year at the Swimming Victoria Annual Awards in Australia. (swimswam.com, 19 Jun 2018; teamdisken.com.au, 2016)

He was named Australia's Swimmer of the Event at the 2018 Commonwealth Games in Gold Coast, QLD, Australia. (Instagram profile, 11 Apr 2018)

In January 2017 he received the Medal of the Order of Australia [OAM] in recognition of the gold medal he won at the 2016 Paralympic Games in Rio de Janeiro. (paralympic.org, 28 Jan 2017)

He was named Senior Sports Star of the Year at the 2016 Leader Sports Star Awards in Australia. (heraldsun.com.au, 23 Nov 2016)

In 2015 he received the President's Trophy at the Swimming Victoria Annual Awards for his achievements at the 2015 World Championships in Glasgow, Scotland. (teamdisken.com.au, 2016)

In 2013 and 2014 he was named Junior Sports Star of the Year by the 'Waverley Leader' newspaper in Australia. (heraldsun.com.au, 14 Nov 2014)
Famous relatives
His older brother Jeff has played water polo at state level in Australia. (sportingpulse.com, 22 Aug 2012)
Impairment
He was born with cerebral palsy. The condition affects both sides of his body, more severely on his left side than his right side. (paralympic.org.au, 01 Sep 2016)
Other information
HEALTH CONDITION
He had a stroke at age one month, which caused an excessive accumulation of liquid in his brain. As he got older, he required a tube to be fitted to drain the fluid from his brain to his stomach, where it dissipates. In 2017, while he was in Canada preparing for the world championships that were due to take place in Mexico later that year, the tube broke and caused him to fall into a coma. He required emergency surgery but was back in the pool in two months and went on to win two gold medals at the 2018 Commonwealth Games in Gold Coast, QLD, Australia. "Normally, if the system blocks, symptoms progress over three days. But because the tubing just broke, it was 12 hours from first signs of a small headache to emergency brain surgery. Where we were in Canada, we were right next to a world-renowned neurosurgical hospital, so I was incredibly lucky." (theguardian.com, 10 Apr 2018)

MUSIC MAN
He began playing the piano at age six, and he has since moved on to producing house music on his computer. "The first 12 months of my life I was stuck in hospital, and music was used as a way to relax me and calm me down. So from day dot, I was essentially using music as a tool. [The late Swedish DJ Avicii] was my favourite producer, and the reason I got into electronic music. He was an incredibly talented musician, everything he touched was musical art. That's what I use to get ready for a race. I have a playlist of about 160 Avicii songs that I sift through, depending what mood I am in. When I heard that he'd passed that was a tough period." (paralympic.org, 18 May 2018, 26 Feb 2019; theguardian.com, 10 Apr 2018)

OTHER ACTIVITIES
He has worked as a volunteer teaching aide at a school for children with an intellectual impairment in Canberra, ACT, Australia. (theguardian.com, 10 Apr 2018)