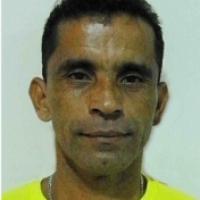 When and where did you begin this sport?
He began running in 1989, and first competed in para-athletics at age 36.
Why this sport?
He wanted to be a football player and started running to improve his conditioning.

Memorable sporting achievement
Winning gold in the T46 category at the 2012 Paralympic Games in London. (globoesporte.globo.com, 09 Sep 2012)
Injuries
He won a silver medal in the marathon at the 2008 Paralympic Games in Beijing despite a partially-ruptured Achilles tendon. (globoesporte.globo.com, 09 Sep 2012)
Ambitions
To become an athlete scout. (cpb.org.br, 22 Jun 2010)
Impairment
In 2003 his right arm was crushed in a packaging machine accident at the drinks factory where he worked. (oglobo.globo.com, 09 Sep 2012)
Other information
COMEBACK
He needed six operations after his accident and spent six months recuperating. He had to take steroids, gained 12kg and became depressed. "It was the hardest moment of my life. The world for me had ended, I had no more self-confidence." With the support of his family, he lost the weight and eventually returned to training. (oglobo.globo.com, 09 Sep 2012; runnersworld.abril.com.br, 13 Mar 2013)

DEDICATION
He dedicated his gold medal at the 2012 Paralympic Games in London to his sons Matheus and Lucas. (oglobo.globo.com, 09 Sep 2012)