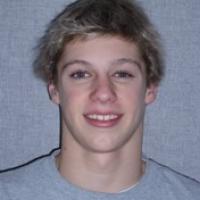 When and where did you begin this sport?
He began swimming in the second grade when his coach, who also taught him at school, said that it would be the best sport for him.
Why this sport?
He enjoys the sensation of being in the water."I feel relaxed, I feel I have a lot more ability. I have a feeling of peace."
Name of coach
Jeannine Carpenter [national], USA

Most influential person in career
His first coach Steve Keller. (swimmingworldmagazine.com, 31 May 2011)
Impairment
He was born with spastic diplegia, a form of cerebral palsy. The condition means his brain constantly sends messages to his leg muscles telling them to contract. "My lower extremities are always really tight. It makes it really hard for me to walk." (swimmingworldmagazine.com, 31 May 2011)
Other information
OCCUPATION
He serves as head coach of the Shorewood Swim Club in Wisconsin, United States. He has also worked as an assistant coach for the girls' swimming team at Grafton High School, also in Wisconsin. (Instagram profile, 18 May 2015; Twitter profile, 18 May 2015)