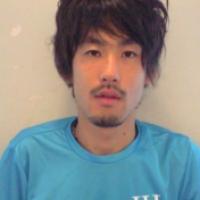 When and where did you begin this sport?
He first tried Para athletics in grade nine of middle school, and took it up seriously when he became a university student.
Why this sport?
One of his close friends belonged to a sports club at junior high school and encouraged him to get involved too. He took a break from the sport when he just entered university, because studying was his priority. However his mother encouraged him to return to competitive action so he joined AC Kita [Tokyo, Japan]. He initially competed in throwing events until high school, but switched to sprinting at university.
Club / Team
AC Kita: Tokyo, JPN
Name of coach
Seiji Thuchida [club], JPN

He sustained a severe laceration to his head while at middle school that required surgery. ((rengo-tokyo.gr.jp, 10 Dec 2018)
Sporting philosophy / motto
"Give your best." (Athlete, 14 Jul 2017)
Awards and honours
In 2016 he was given the Kita City Citizen Cultural Citation Award and Kita City Sport Association Honorary Award in Tokyo, Japan. (city.kita.tokyo.jp, 04 Dec 2016)
Ambitions
To finish in the top four at the 2019 World Championships in Dubai, the United Arab Emirates, and to win a medal at the 2020 Paralympic Games in Tokyo. (rengo-tokyo.gr.jp, 10 Dec 2018; city-volunteer.metro.tokyo.jp, 13 Jan 2017)
Impairment
He was born with a shortened right forearm. (1242.com, 17 Aug 2015)