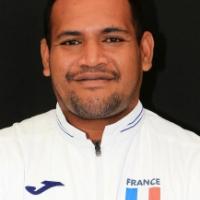 When and where did you begin this sport?
He took up javelin throw in 2011 after switching from shot put.
Why this sport?
"My performance in javelin became better than in shot put and the world loves the throwing events." He also likes the travelling aspect of the sport.
Name of coach
Viko Halagahu, FRA

Hobbies
Listening to music. (Athlete, 20 Aug 2018)
Memorable sporting achievement
Winning silver and breaking the European record in the F44 javelin throw at the 2012 Paralympic Games in London, and winning gold at the 2013 World Championships in Lyon, France. (Athlete, 23 Oct 2015; 20 Aug 2018)
Most influential person in career
His family. (Athlete, 23 Oct 2015)
Hero / Idol
Czech javelin thrower Jan Zelezny. (Athlete, 23 Oct 2015)
Awards and honours
He lit the cauldron at the opening ceremony of the 2013 Pacific Mini Games in Mata-Utu, Wallis and Futuna. (fijisun.com.fj, 03 Sep 2013)
Impairment
He was born with congenital talipes equinovarus [also known as club foot]. (Athlete, 23 Oct 2015; 20 Aug 2018)
Other information
BACK TO SPORT
In June 2017 he returned to sport after one year out. He returned at the French national championships in Charlety. "I took a sabbatical, I rested. I will now motivate myself again so I can reach my goals." (la1ere.francetvinfo.fr, 01 Jun 2017)