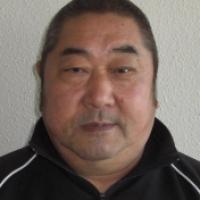 When and where did you begin this sport?
He took up Para athletics in 1994 in Japan. He had been a baseball player at high school level, representing his prefecture.
Why this sport?
He initially took up Para swimming for rehabilitation after his accident, but his friend recommended he try Para athletics, and he found the sport more interesting than Para swimming. In 2014 he switched to shot put from discus in order to compete at the 2016 Paralympic Games in Rio de Janeiro.
Club / Team
Tohoku Para Athletics Association: Japan
Training Regime
He makes up to 50 shot put throws a day.

In 2008 he sustained a compression fracture and required six months of recovery. (Athlete, 07 Sep 2016)
Awards and honours
In 2004 he received the Iwate Prefecture Sports Award in Japan. (iwate-np.co.jp, 02 Sep 2013)
Milestones
He was the oldest male Japanese athlete to compete in any sport at the 2012 and 2016 Paralympic Games. (SportsDeskOnline, 13 Aug 2020)

He was the oldest Japanese athlete of either gender to compete in Para athletics at the 2008, 2012 and 2016 Paralympic Games. (SportsDeskOnline, 13 Aug 2020)
Ambitions
To make a shot put throw of 7.20 metres, and to win a medal at the 2020 Paralympic Games in Tokyo. He also hopes to compete at the 2024 Games in Paris. (asahi.com, 25 Jan 2020; sports.nhk.or.jp, 25 Jun 2020)
Impairment
In 1988 he damaged his spinal cord following an accident while working as a fisherman. (nosolodeportes.com, 15 Dec 2008; yahoo.co.jp, 22 Mar 2020)
Other information
CHANGE OF DISCIPLINE
He considered retiring from the sport after the 2012 Paralympic Games in London, because his main event of men's F53 discus was not included in the programme for the 2016 Games in Rio de Janeiro. However, he decided to switch to the men's F53 shot put after Tokyo won the bid to host the 2020 Games. He is right handed, but throws with his left because he cannot raise his right arm over his shoulder. (tfm-plus.gsj.mobi, 01 Nov 2019; yahoo.co.jp, 22 Mar 2020)

TSUNAMI
In 2011 he was rescued from his house by firefighters in Hirono, Japan, as a 10-metre high tsunami rushed into his town. He did not train for approximately six months after the tsunami. "I was thinking that it would not be okay for me to continue competing when everyone around me was going through a tough time. But many people encouraged me to resume training, so I competed at the 2012 Paralympic Games in London in order to inspire them." (suntory.co.jp, 04 Sep 2017)