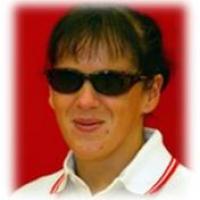 When and where did you begin this sport?
She took up athletics in 1988 at age 18 at Cardiff Athletics Club in Wales.
Why this sport?
She played many sports at school but decided to focus on athletics after she was chosen to represent Great Britain as a junior.
Club / Team
Cardiff Athletics Club: Wales
Name of coach
Paula Dunn [national], GBR; Darrell Maynard[personal], from 2006, GBR

Memorable sporting achievement
Representing Great Britain for more than 20 years. (lloydstsblondon2012.co.uk, 18 Jul 2012)
Injuries
She sustained an Achilles injury in late 2004 which ruled her out of competition for almost two years. (paralympics.org.uk, 22 Jan 2010)
Awards and honours
She was made a member of Most Excellent Order of the British Empire [MBE] in June 2013. (cardiffaac.org, 16 Jun 2013)
Impairment
She lost her sight at age four due to cancer of the retina. (paralympics.org.uk, 22 Jan 2010)
Other information
LEADER
She was captain of Great Britain's athletics team at the 2012 Paralympic Games in London. (cardiffaac.org, 16 Jun 2013)