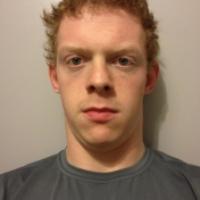 When and where did you begin this sport?
He began powerlifting in 2011 at the University of Central Oklahoma [UCO] Endeavor Games in the United States of America.
Why this sport?
He attended the UCO Endeavor Games to compete in wrestling and running and only competed in powerlifting when asked by a friend. He won a gold medal in the event and has continued competing since.
Name of coach
Butch Schovanec [national]

"Work smarter, not harder." (ksdk.com, 19 Feb 2014)
Other sports
He has played ice sledge hockey for the St Louis Blues in Missouri, United States of America. (usahockey.com, 2015)
Impairment
He was born with tibial dysplasia, a condition that prevents the bones in the lower leg from developing. His parents decided to amputate both legs above the knee when he was 13 months old. (Facebook page, 19 Jun 2015)
Other information
BUSINESS OWNER
He runs his own personal training business named FitBunch, which operates in St. Louis and Saint Charles in Missouri, United States of America. (fitbunch.net, 21 Jan 2016)