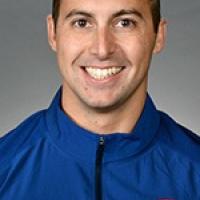 When and where did you begin this sport?
He began swimming in 2004, and took up Para swimming in 2007 at the Governor Morehead School for the Blind in Raleigh, NC, United States of America.
Why this sport?
He would always go to the pool to watch his older sister's swimming practices, so her coach convinced him to get into the pool and try the sport for himself.
Club / Team
New Trier Swim Club: Chicago, IL, USA
Name of coach
Alexis Keto [club], USA
Training Regime
He trains four hours a day, six days a week, including swimming, lifting weights, and spin classes.

Year
2007
Competing for
United States
Location
Vancouver, BC, CAN

He was awarded the 2007 Winston Salem YMCA [WSY] Andy Craver Determination Award from North Carolina Swimming in the United States of America. (teamusa.org, 02 Mar 2010)
Impairment
He was diagnosed with Leber's hereditary optic neuropathy in 2006, and lost 80% of his vision over the following six months. (newsobserver.com, 24 Jul 2009; swimmingworldmagazine.com, 12 May 2016)
Other information
OTHER STUDIES
He has also studied an online degree in communications and marketing from DeVry University in the, United States of America. (teamusa.org, 26 Feb 2016)