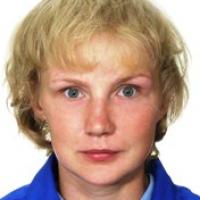 Family
She has a son.
Residence
Tyumen, RUS
Languages
Russian

Hobbies
Spending time with her son. (ugrasport.com, 04 Apr 2011)
Sporting philosophy / motto
"Happiness is healthy children, living parents and true friends." (odnoklassniki.ru, 08 Feb 2014)
Awards and honours
She was recognised at the 2009 ceremony for Sporting Elite of the Tyumen region of Russia. (tumentoday.ru, 24 Apr 2010)
Other information
VANCOUVER DISAPPOINTMENT
She was not pleased with her performance at the 2010 Paralympic Winter Games in Vancouver. "The course was difficult for me. Until the day of the race the weather stayed warm, and then at the start [of my race] it became sharply cold. After Vancouver I was dissatisfied with myself. I will strengthen my load and train more." (tumentoday.ru, 24 Apr 2010)