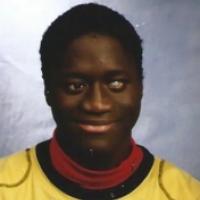 When and where did you begin this sport?
He took up Para athletics in 2011.
Why this sport?
He was originally reluctant to take up athletics because it was an individual sport. A teammate from his football team then suggested that he go on a trip with an athletics team, where he realised that he could make friends and share experiences with other athletes through the sport.
Club / Team
Omero Runners Bergamo: Italy
Name of coach
Michele Gionfriddo [national]; Angelo Alfano
Training Regime
He trains five or six times a week.

Hobbies
Listening to music, playing football, volunteering. (abilitychannel.tv, 12 Dec 2016)
Sporting philosophy / motto
"Never give up." (abilitychannel.tv, 12 Dec 2016)
Impairment
His visual impairment is a result of the effects of measles. (3tempo.net, 2016)
Other information
FROM GUINEA-BISSAU TO ITALY
Born in Guinea-Bissau, he moved to Italy in 2000 to receive treatment for his visual impairment. He lived in Bergamo with an Italian family, who eventually adopted him, and he has since gained Italian citizenship. (3tempo.net, 2016)