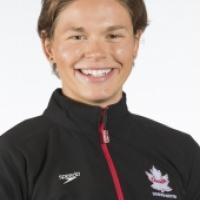 When and where did you begin this sport?
She took up the sport at age nine in Canada.
Why this sport?
Her parents introduced her and her brother Philippe to swimming. She quickly fell in love with the sport and lifestyle.

Hobbies
Spending time with friends, yoga, running, going to the gym. (mcgill.ca, 01 Oct 2012)
Memorable sporting achievement
Winning gold at the 2013 World Championships, which were held in her hometown of Montreal, QC, Canada. (canoe.ca, 18 Aug 2013)
Injuries
A shoulder injury meant she was unable to compete for much of 2010. (mcgill.ca, 01 Oct 2012)
Awards and honours
She was named Swimming Canada's 2013 Female Paralympic Swimmer of the Year. (timescolonist.com, 27 Nov 2013)

She captained the Canadian swimming team at the 2012 Paralympic Games in London. (mcgill.ca, 01 Oct 2012)
Impairment
She began losing vision in her left eye at age 12 due to macular degeneration. The condition began to affect her right eye three years later. "I see better on the periphery, but not so well in the middle. And I don't have any depth perception whatsoever." (mcgill.ca, 01 Oct 2012)
Other information
RETIREMENT, COMEBACK, RETIREMENT
She retired from swimming following her success at the 2008 Paralympic Games in Beijing, where she won a total of five medals. However, she decided to return after discovering that Peter Carpenter would be coaching at McGill University in Montreal, QC, Canada, where she was attending school. "I actually quit, and then I heard that Peter was starting as the swim coach at McGill and I thought maybe I would just try it as a social thing." She returned for several years, until August 2014 when she announced her retirement from competitive swimming. (paralympic.ca, 05 Aug 2014; mcgilltribune.com, 21 Nov 2011)