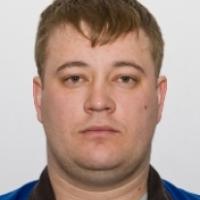 When and where did you begin this sport?
He took up the sport in 2011 with SHC Ugra in Khanty-Mansiysk, Russian Federation.
Why this sport?
During a prosthesis procedure he heard SHC Ugra were recruiting players. He was invited to a training camp after calling the club and sending them his curriculum vitae. "My childhood dream was to play ice hockey, and this [Para ice hockey] is the closest thing to it."
Club / Team
SHC Ugra: Khanty-Mansiysk, RUS
Name of coach
Alexander Zykov [club], RUS; Ruslan Batyrshin [national], RUS
Preferred position / style / stance / technique
Defence

He received the Order for Merits to the Fatherland [first class] in the Russian Federation in recognition of his performance at the 2014 Paralympic Winter Games in Sochi. (kremlin.ru, 17 Mar 2014)

In 2014 he received the title of Honoured Master of Sport in the Russian Federation. (minsport.gov.ru, 17 Mar 2014)
Other sports
He won a silver medal in sitting volleyball at the 2007 World Championships in Brazil. He has also played wheelchair basketball at international level. (csi-ugra.ru, 30 Jan 2014)
Impairment
At age seven he lost a leg in a car accident. (csi-ugra.ru, 01 May 2014)