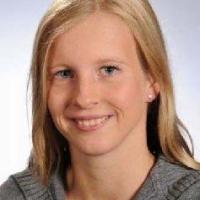 When and where did you begin this sport?
She took up the sport in 1998 at age eight in Haltern, Germany.

She was named Sportswoman of the Year in Haltern, Germany, in 2009 and 2011. (halternerzeitung.de, 16 Feb 2012)
Impairment
She was born without lower arms or a lower right leg due to dysmelia. (Athlete, 04 Apr 2011)
Other information
RETIREMENT
In 2016 she retired from competitive Para swimming. She went on to take a role in a project organised by the German Disability Sports Federation [DBS], promoting the full-time employment of people with an impairment in sports organisations. (deutsche-olympiamannschaft.de, 13 Mar 2017; rp-online.de, 02 Feb 2016)