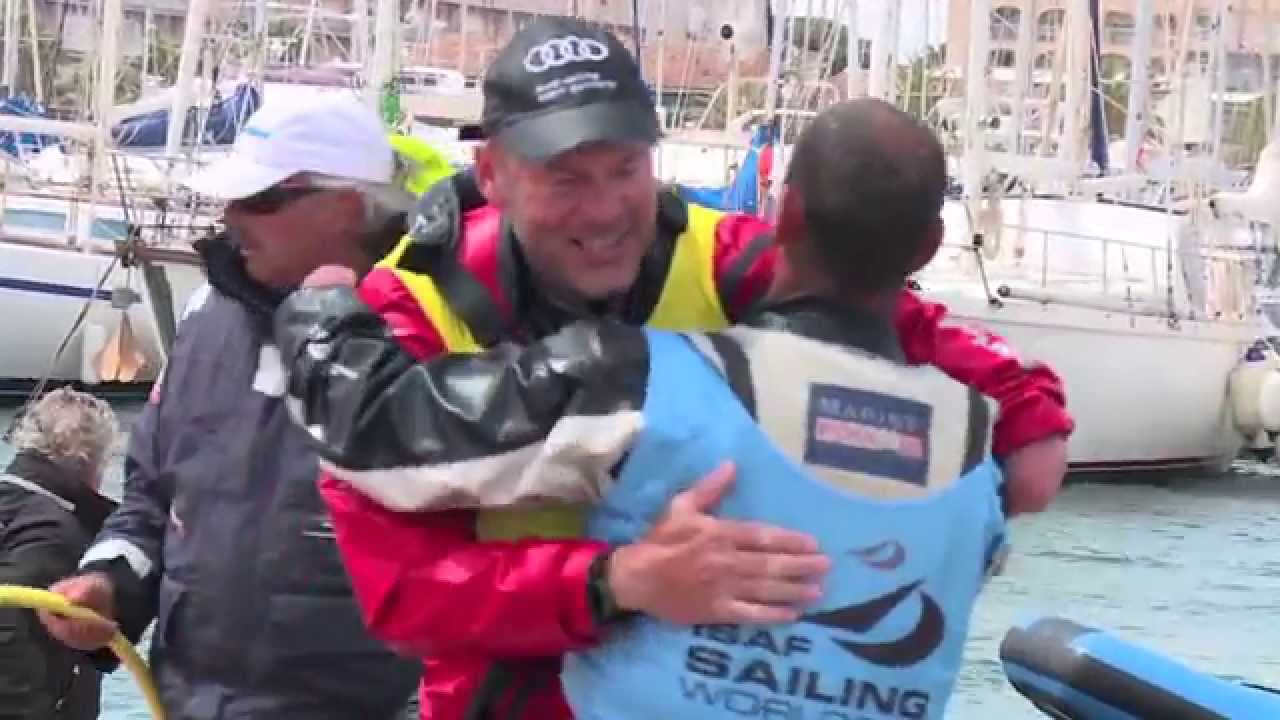 Germany's Heiko Kroeger starred in the 2.4mR as he came away with the top honours as racing for para-athletes concluded at ISAF Sailing World Cup Hyeres this weekend.

The sonar honours were decided in the jury room after racing with Great Britain's John Robertson, Hannah Stodel and Stephen Thomas taking gold ahead of the penalised French trio of Bruno Jourdren, Nicolas Vimont Vicary and Eric Flageul.

The 16-boat 2.4mR and eight boat Sonar fleets brought their racing to an end in an easterly 10-13 knot breeze with two exciting races apiece as it all went down to the final bout.

Coming into the final day it was all to play for in the 2.4mR between Kroeger, France's Damien Seguin and Great Britain's Megan Pascoe.

Just a single point separated the trio with Kroeger at 13 points and the French and British sailors at 14.

Seguin went out with intent and took the opening race bullet by one second ahead of Kroeger whilst Pascoe only managed a fourth.

With one race remaining it was a winner-take-all scenario between Seguin and Kroeger who were tied at 15 points with Pascoe in with a shout at 17 points.

The final race went down to the wire with the German and French racers fighting from the start.

"It was really exciting, I was leading with Damien and it was really tight in points," Kroeger said. "It was him or me."

"He was a bit ahead and I was trying to get in to a position where I could do something. On the second upwind there was a possibility because there were some shifts to the right and I took the right one and I got him.

"The last downwind was extremely interesting because there were some patches in the wind, big waves, and small waves and right at the finish line it was really choppy and I got stuck in some waves. Damien was accelerating so it was really close and hard work."

One second was the difference as Kroeger crossed the finish line ahead of Seguin to take gold.

Pascoe came through in third in the final race and took a well-earned bronze medal. From three ISAF Sailing World Cup regattas, Pascoe now has a gold from Miami, a Mallorca silver and completed the package in Hyeres

A British protest over the French team ensured the gold and silver medals were decided in the jury room as the two bullets secured by the French were scored a discretionary 20 per cent penalty.

The French came away with a pair of 3DPI scores whilst the Briton's second and fourth meant they took gold.

Norway's Aleksander Wang-Hansen, Per Eugen Kristiansen and Marie Solberg, and Australia's Colin Harrison, John Harris and Russell Boaden came into the final day in with a shout of gold but the way the British and French teams were sailing they were always up against it.

The French team had the math worked out and went out hard in the opening race to take the race win over the Brits by 40 seconds.

It went down to the final race with any of the top four able to take gold. In the end it was a case of two battles on the course as the French and Brits went head to head for gold, while the Norwegians and Australians fought for bronze.

The French got the better of the start and took the bullet by 46 seconds.

But as soon as racing concluded the British team rushed ashore to file a protest against the French trio.

Robertson, Stodel and Thomas come away with gold, the French silver and Australians bronze.

The para-fleet will now turn attentions to the IFDS World Championships, which will take place in Nova Scoatia, Canada from 15-24 August. The regatta serves as the first qualification regatta for the Rio 2016 Paralympic Sailing Competition.