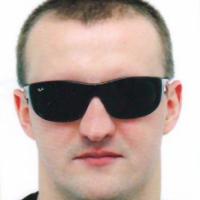 When and where did you begin this sport?
He took up the sport in 2001 in Sloviansk, Ukraine.
Why this sport?
His mother encouraged him to follow the example of his compatriot, Ukraininan Para swimmer Oleksandr Mashchenko.
Club / Team
Invasport: Donetsk, UKR
Name of coach
Svitlana Kaznacheyeva [personal], UKR; Andriy Kaznacheyev [personal], UKR

Nicknames
Vitya (fakty.ua, 11 Nov 2015)
Memorable sporting achievement
Winning five gold medals at the 2004 Paralympic Games in Athens. (SportsDeskOnline, 03 Aug 2021; Athlete, 21 Aug 2019)
Awards and honours
In recognition of the silver medal he won at the 2020 Paralympic Games in Tokyo, he received the Order for Merit [second class] in Ukraine. (zakon.rada.gov.ua, 16 Sep 2021)

In recognition of his performance at the 2016 Paralympic Games in Rio de Janeiro, he received the Order for Merit [third class] in Ukraine. (president.gov.ua, 04 Oct 2016)

In recognition of his performance at the 2004 Paralympic Games in Athens, he was given the Hero of Ukraine title. He also received the title of Honoured Master of Sport in Ukraine in 2004. (dsmsu.gov.ua, 31 Dec 2020; swim.dn.ua, 01 Oct 2019; swim.dn.ua, 01 Jan 2014)
Milestones
He became the first athlete representing Ukraine in any sport to win five Paralympic gold medals when he won five events at the 2004 Paralympic Games in Athens. (SportsDeskOnline, 04 Aug 2021)
Impairment
He lost his vision at age nine after a firework exploded while he was playing with friends. (sportclub-isd.com, 02 Aug 2017)
Other information
OCCUPATION
He has worked in sport development for Sloviansk City Council in Ukraine. (svoi.city, 20 Sep 2019; podrobnosti.ua, 12 Jul 2019)

COMPETITION HOST
In 2018 he relaunched the Believe in Yourself swimming competition for children with impairments in Sloviansk, Ukraine. The event had previously taken place in Donetsk, Ukraine, from 2006 to 2014. (dnews.dn.ua, 01 Feb 2020; podrobnosti.ua, 10 Feb 2018)

FURTHER EDUCATION
He has completed a master's degree in intellectual property law at Donetsk State University of Management in Ukraine. (slavrada.gov.ua, 01 Jan 2019)