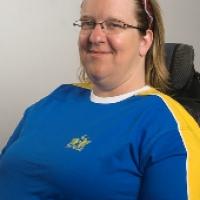 When and where did you begin this sport?
She has been an elite shooter since 1993.
Why this sport?
"My father wanted me to try a sport that he understood. He did not like horses, or swimming, so it had to be shooting. At first I did not like it, but then it began to go very well."
Club / Team
Djuro SSF: Sweden
Name of coach
Marcus Aberg [national]
Coach from which country?
Sweden